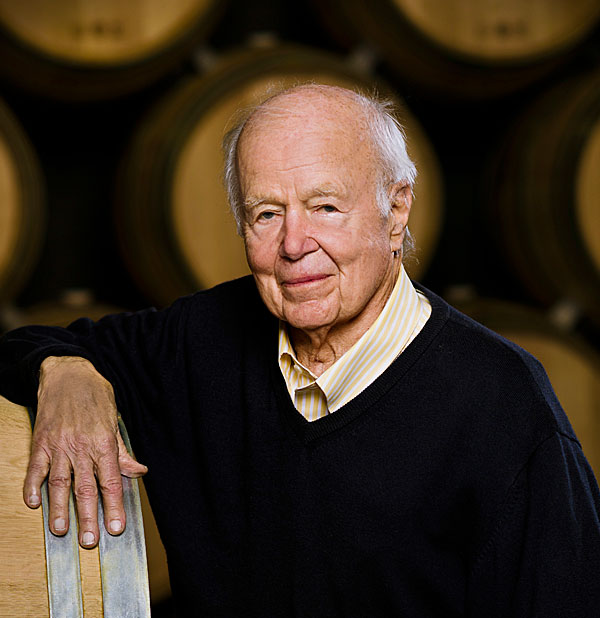 Over the course of his life, John Shafer embraced a number of fascinating jobs – in World War II he piloted B-24 bombers in Europe, then for a time he put his Cornell University engineering degree to good use, and later he moved into publishing, rising to the level of corporate executive with Scott Foresman in Chicago.

Shafer made his defining career choice in 1972, moving his family from Chicago to California’s lush Napa Valley. Here under the massive, craggy Stags Leap palisades, he had located the kind of property that he had identified in his research – a hillside with thin, volcanic soils, the sort of vineyard site that he knew has been prized in the Mediterranean world for centuries.

The vineyard the family purchased had last been planted in 1922 and the vines were well past their prime. Shafer immediately embarked on his new career setting to work replanting the original 30 acres of vineyards and then began establishing new vine plantings on the hillsides.

Learning as he went Shafer spent the mid- to late-1970s learning the intricacies of hillside grapegrowing. Along the way he discovered more about the nature of the site, its soils, its climate, and how well it seemed matched to red grape varietals, especially Cabernet Sauvignon.

What began as a career in viticulture eventually expanded into full-scale winemaking. In 1978 John made the first Shafer Vineyards wine, a Cabernet Sauvignon sourced from the first newly planted block of hillside vines. That debut wine was released in 1981 to high praise from critics and consumers alike; it set a benchmark for future Shafer hillside Cabernets and in effect was the forerunner of Hillside Select.

In 1983 John asked his son, Doug, to join the family enterprise as winemaker. A year later he hired Elias Fernandez to become assistant winemaker. With the home team in place, John was able to spearhead the administrative and marketing side of the business, expanding into key markets both domestically and later internationally.

With their wines earning a growing reputation for quality and consistency, Shafer presided over the expansion of the winery facility and construction of a new wine cave for barrel storage and wine aging.

By 1994 he initiated a shift in the core team, making Doug the winery president, naming Elias winemaker, and carving out a new role for himself as chairman. Stepping out of the president’s position allowed Shafer to get more involved in philanthropy. Both as a board member of Clinic Ole, a medical care facility for low-income residents, and with his work with Auction Napa Valley, Shafer saw a need in the local nonprofit world – more and more of their limited budgets were being eaten up by rising rents.

In 1999 Shafer led an effort to create today’s Napa Valley Vintners Community Health Center located in Napa. This single facility is designed to house four nonprofit organizations that provide key medical and wellbeing services to Napa’s low-income residents. Each organization is guaranteed rent costs at well below market levels allowing them to utilize more of their budgets to provide critical services.

Over the decades, Shafer was the recipient of numerous awards for both wine quality and for his work in philanthropy. In 2010 both he and son Doug were invited to the James Beard Foundation Awards in New York, the “Oscars of the Food World,” where they were honored by being named “Outstanding Wine and Spirits Professional.” Shafer was thrilled to join previous Napa Valley recipients: Robert Mondavi (‘91), André Tchelistcheff (‘92), and Jack and Jamie Davies (‘96).

The world of wine continued to challenge and inspire John Shafer well in his 90s. He lived an incredible life and helped create and maintain a culture at Shafer Vineyards that prizes friendship, support, generosity, and integrity.