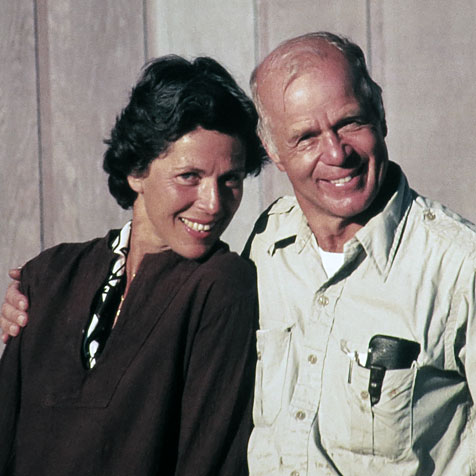 In 1972 John and Bett Shafer, both nearing the age of 50, decided to roll the dice on the promise of a new life in California.

They’d raised four children in Hinsdale, Illinois, a comfortable, tree-lined suburb of Chicago. John was an executive at the publishing firm, Scott Foresman, while Bett had been running a house filled with four very active kids, their friends, and various pets. Now two of their children were in college, a third, Doug, was in the later half of high school, and their youngest was in middle school.

Both restless and energetic, John and Bett were ready for something new.

It was John’s idea to explore the wine business in California, which he believed was on the verge of taking off. He made several exploratory trips to areas in the Golden State known for growing grapes and making wine. In late 1972 when he found an ideal hillside vineyard in a distant farming community called Napa Valley, Bett was ready to go.

The Shafer family moved from Chicago to Napa Valley in January, 1973. Here under the massive, craggy Stags Leap palisades, Bett first laid eyes on the property that John had identified in his research – an amphitheater-like hillside with thin, volcanic soils, the sort of vineyard site that he knew had been prized in the Mediterranean world for centuries.

With the purchase of a 209-acre property (much of it too steep to plant), John and Bett inherited a ramshackle red-tiled farmhouse, various outbuildings, and farming equipment, including a 1950s-era International Harvester TD-9 tractor. One of John’s first tasks was to teach himself how to drive and maintain the tractor, a skill that nothing in his corporate life in Chicago had prepared him for.

The main feature of that original purchase was 30 acres of vines planted in the early 1920s – a hodgepodge of red and white grape varieties such as Golden Chasselas, Sauvignon Vert, and Zinfandel. His first order of business was to learn to care for the fruit already planted, which he would sell at harvesttime in the fall. The second was to begin to replant those 30 acres of aging vines growing on the flatter portion of the property, and the third and most challenges was to plant the wild upper reaches of the family’s hillsides.

He and Bett eventually transitioned to full-scale winemaking. In 1978, John made the winery’s first Cabernet Sauvignon and a year later construction began on the family winery. The debut wine was released in 1981, which John and Bett poured side by side at countless tasting events. Likewise, they learned the wine business together. John took on production and marketing, while Bett tackled the administrative side, handling payments, managing invoices and payroll, and keeping a lid on costs. She was famous for making sure lights were turned off. Once new-employee Elias Fernandez found himself in total darkness at the top of a tank in the cellar when Bett swept through flipping switches off making sure electricity wasn’t being wasted.

As Shafer Vineyards expanded and flourished in the late 1980s and early 1990s, with the heavy lifting of launching the family business largely done, Bett stepped away to pursue other interests. John Shafer stayed involved in day-to-day operations through his mid-90s.

Everyone at Shafer has the unflagging, adventurous, and enterprising spirit of Bett and John Shafer to thank for the winery, vineyards, and the wines that exist today. Their sense of adventure and approach to life, business, family, and friends continues to inspire everything we do.